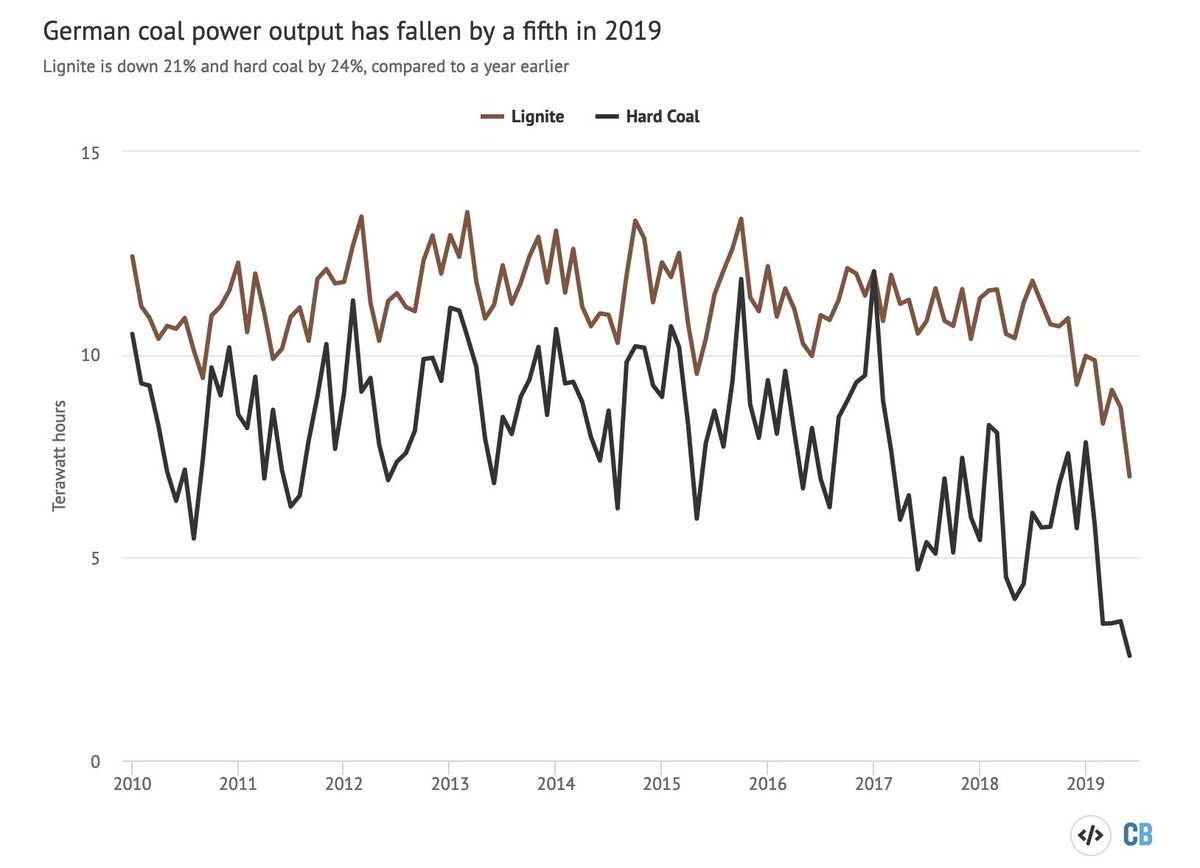 “Germany accounting for roughly a third of all electricity-related CO2 emissions in the EU : half of EU electricity generation from brown coal (lignite) + a quarter of the total for hard coal takes place in Germany”

-> “wind is on track to become the single largest source of electricity in Germany this year, overtaking lignite” 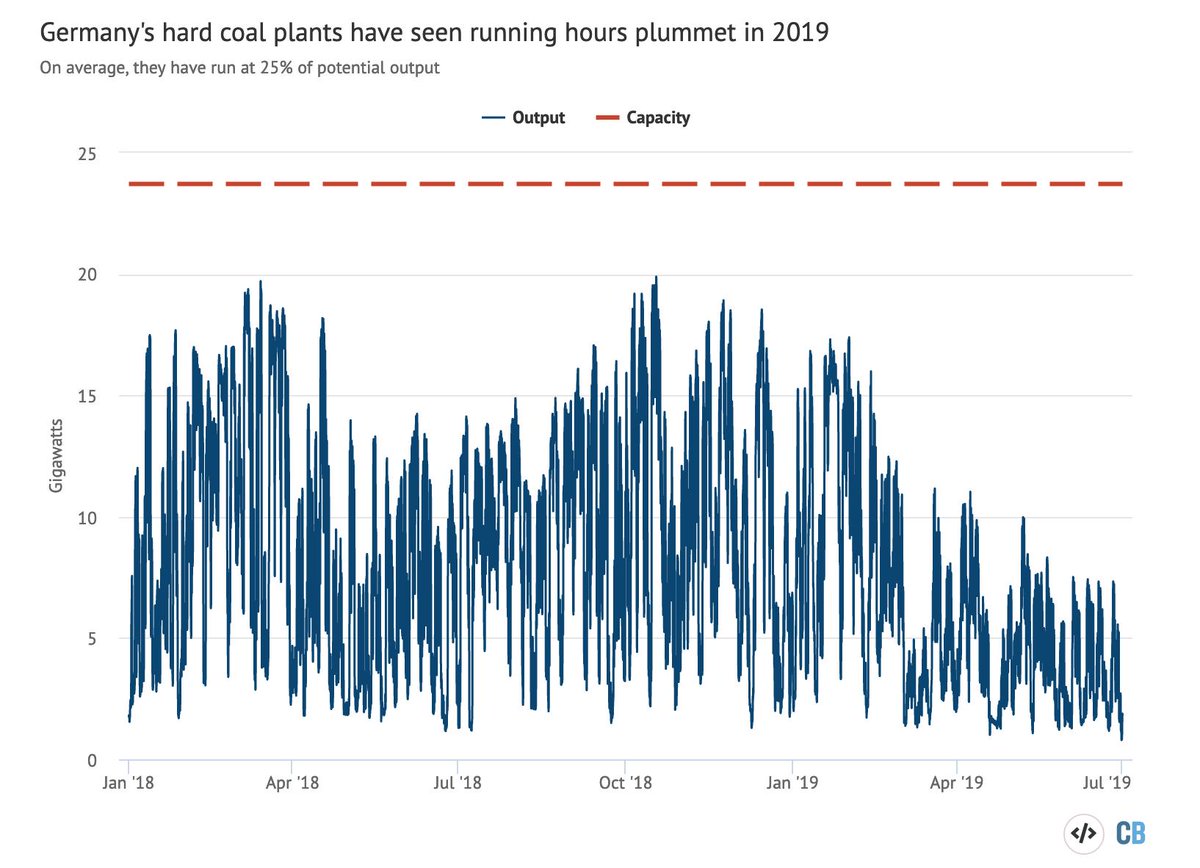 “increase in the “drop-off price” - point below which plants are unable to operate without losing money - under which lignite plants significantly reduce their output, from about €10/MWh in 2017 to about €30/MWh in 2019.” https://t.co/g5Ueo9RzJm 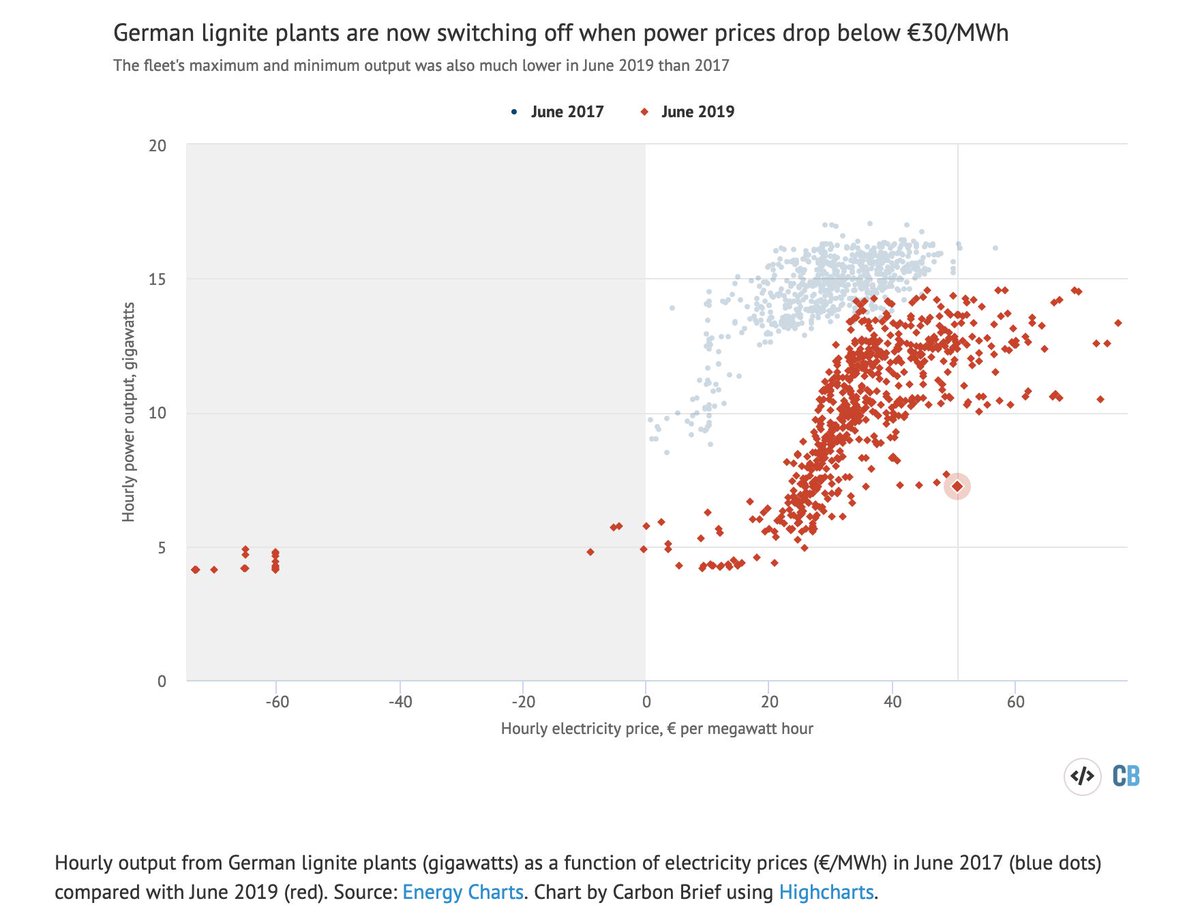 Some brown coal (lignite) plants have stopped generating over the past years, being kept open as “reserve”

-> Coal capacity does not automatically translate into emissions.

Cost of operation and emissions

-> In April, the cost of emitting CO2 (red line) overtook the cost of buying hard coal for a typical power plant (grey) 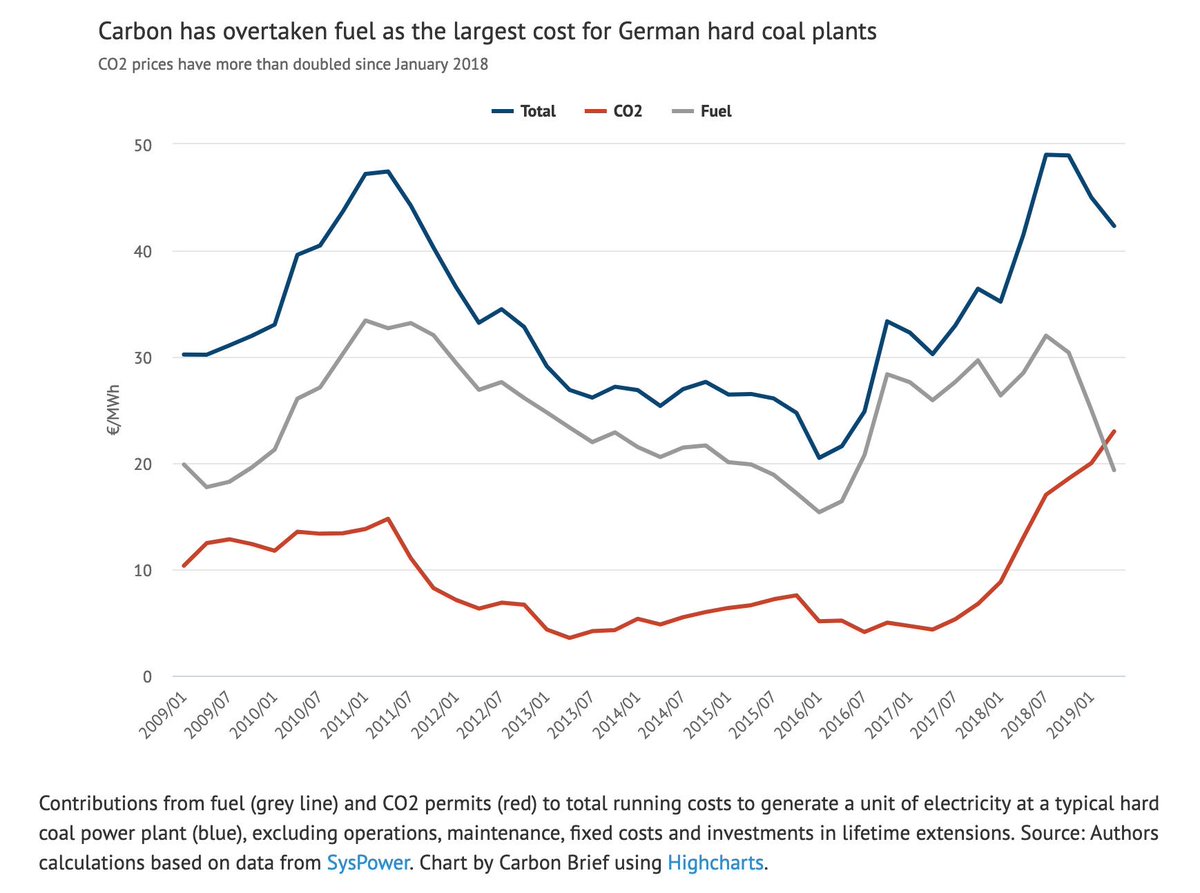 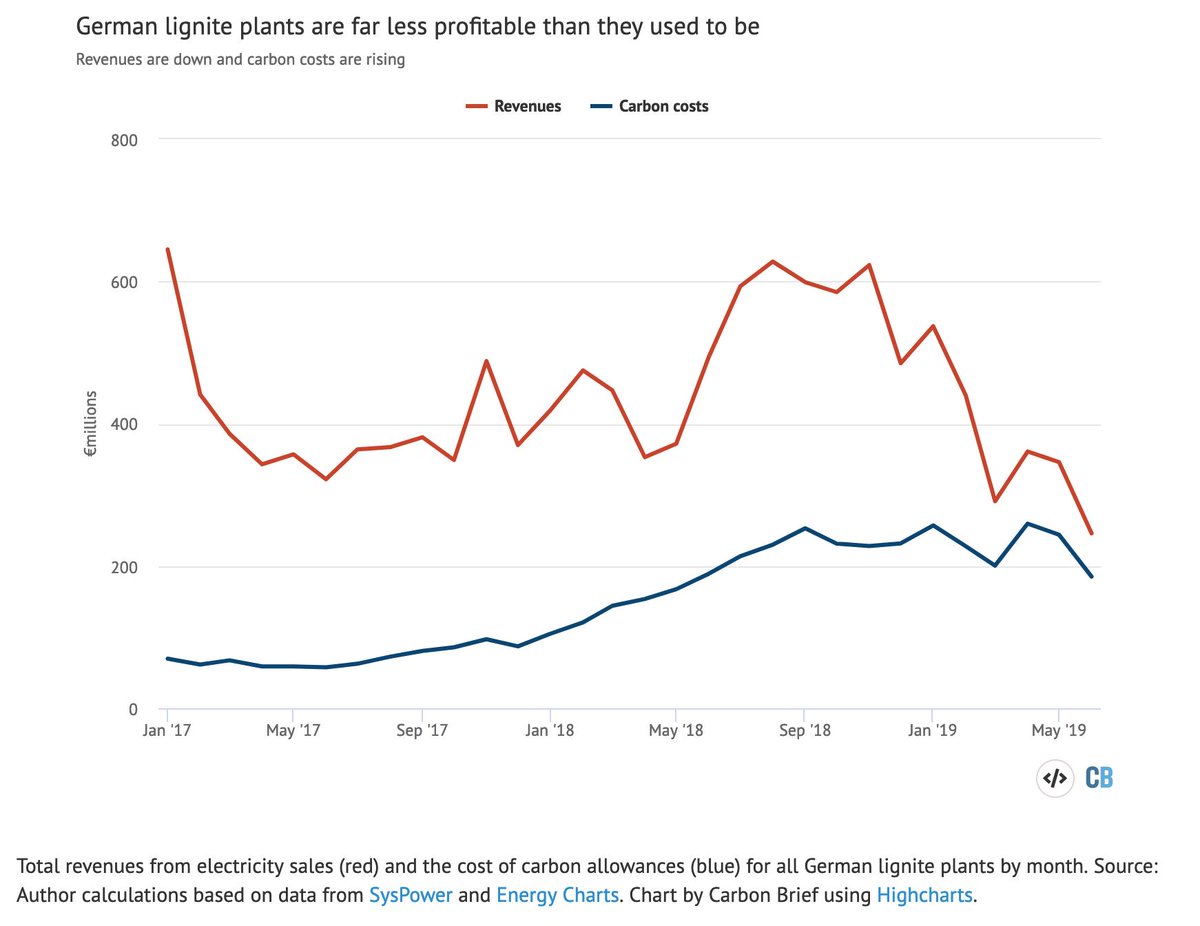 “current market expectation is that lignite revenues will increase slightly over the next few years, with gas prices due to rise and competition from nuclear plants disappearing as Germany completes its phaseout of the technology by 2022.”

-> “lignite generation could rebound in the short term, as plants are expected to become cheaper to run (brown line) than their gas counterparts (blue line)” 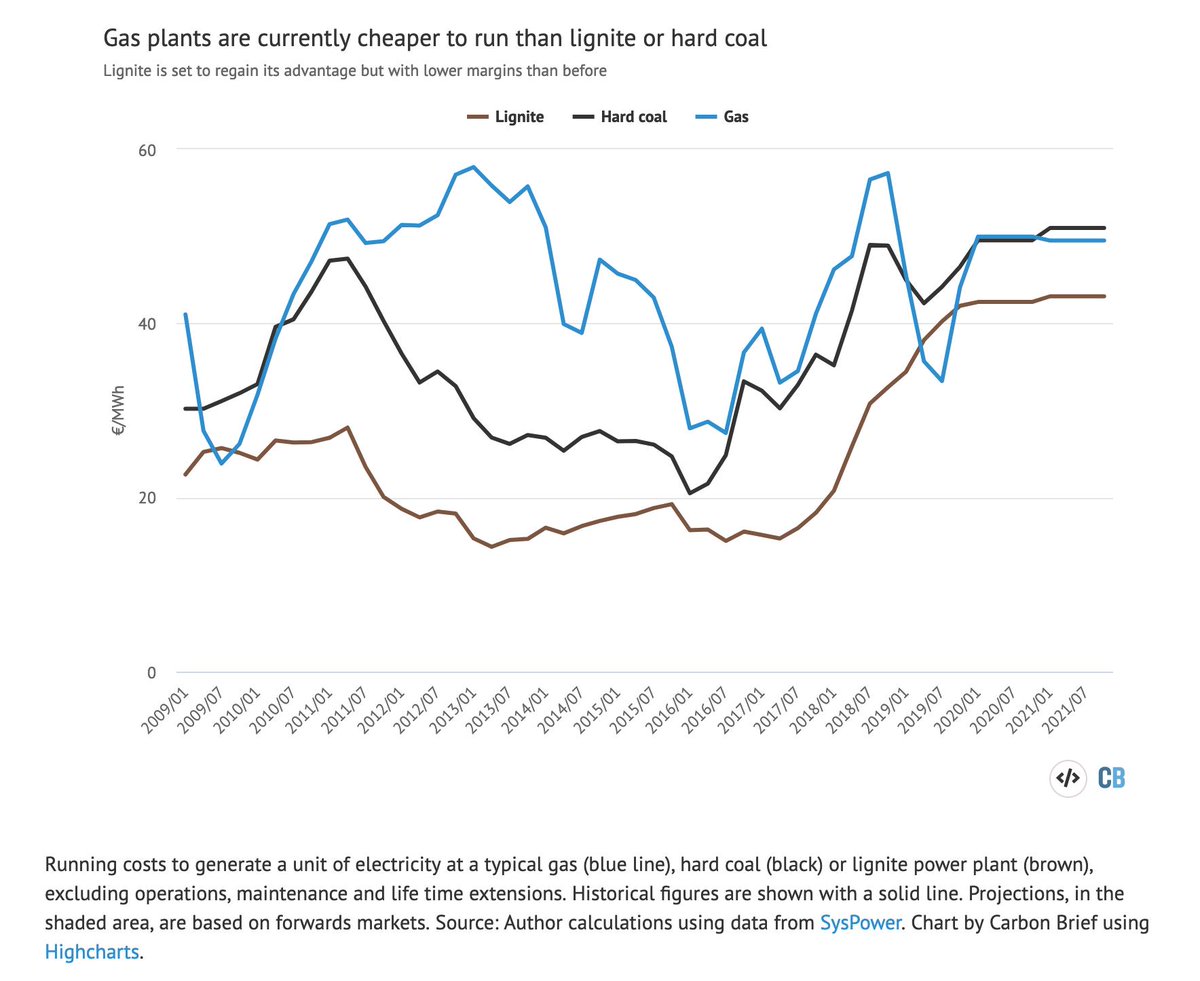 “Chart may even overstate the profitability of lignite plants, as it assumes a short-term running cost of €10/MWh. Longer-term running costs – on top of carbon costs – could be as much as €22/MWh, according to @ieefa_institute, citing figures from German lignite operator RWE.”

Any idea where the other ~8 EUR/MWh come from?
Probably not fuel costs, so why higher costs in ops?

Thanks! So the devil is in the emission factor.. :) It seems indeed that the German coal electricity emission intensity - dashed line in figure - is close to the global average mean of 1.13 ton/MWh (kg/kWh) [https://t.co/RRE5FIygYp] Using op. cost of 10 €/MWh one gets to +- 40. pic.twitter.com/BoiZniMIdW

Short answer: no, if we manage the transition intelligently

Conflicting interests and arguments in a battle for coal closure compensations

“They want to build up pressure to receive payments for capacities which otherwise would have no chance to come to play in the market.” @Oliver_Krischer

“Over the next 10 years, coal-fired and nuclear power plants with a total capacity of around 100 GW will be shut down in Europe, equivalent to Germany’s thermal power capacity alone, according to grid operator data. “

“To counter this, hundreds of gigawatts of offshore wind are planned to line European coastlines by the end of next decade, according to the EU’s green expansion plans. “

“Most industry experts agree the transition is needed to combat climate change, and that within 10 or 15 years there will be substantial renewable generation to provide reliable cover for the continent, on the road to carbon neutrality by 2050. “

“German output accounts for around 20% of the European Union’s electricity, with France another 17%, according to figures from Eurostat, the EU statistics office. “

-> “But we will be able in the long run to operate a power system based nearly fully on renewables. Everyone who understands the matter agrees on that”