A recent comment in Nature Communications cought my attention with it’s slightly provocative title ‘Why setting a climate deadline is dangerous’, suggesting that such a deadline would be ‘dangerous’ and that the IPCC should ‘challenge the the credibility of such a deadline’. Of course, the progress of climate change can be measured in a multitude of indicators and targets, but the current political frameworks (social movements, climate negotations within the UNFCCC, …) are all built around a temperature target. Why going against this? Having gone through the article, it seems the arguments don’t go beyond fairly conservative ideas such as [1] “it could lead to politically dangerous consequences”, [2] “incite cynical, cry-wolf responses and undermine the credibility of climate science when an anticipated disaster does not happen” or [3] “promulgates the imaginary of extinction and the collapse of civilization”. Also, the article first states that the IPCC - as a scientific body - should reflect on this, but in the end stating the contrary with “the IPCC should recognize that the knowledge it produces is already unavoidably political.” Maybe too much a fuzz about nothing, but I would like to defend the political process that goes with the transition, being currently a temperature target and associated carbon budget deadline. It seems politically counterproductive to go against this idea. Two interesting twitter-thread rebuttals were written yesterday and today by Dr. Genevieve Guenther, and I am happy to republish them here:

Took a moment to read this @NatureClimate comment, and I must say I am truly shocked by its fundamental misreading of the statement it purports to critique, not to mention its assuming important claims for which it provides no evidence.

First of all, the comment claims that the @IPCC_CH projection of a temperature rise of 1.5 C by 2030 lead to “political” claims that we have 12 years to avoid dangerous climate change.

This is a blatant misreading of the @guardianeco article linked to support this claim. 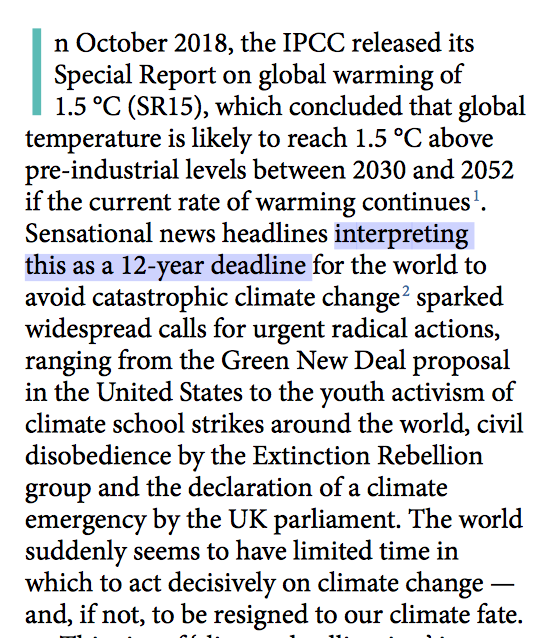 Granted, the prose in the 1st paragraph of the Guardian article is kind of garbled, in part because the article as a whole talks about mitigation deadlines and the differences between 1.5 and 2 C in one jumble, BUT…

a minimally conscientious reading shows that the 12 years target is an interpretation of the amount that emissions must decline by 2030 to have a greater than 50% to keep temperatures at the more desirable 1.5C.

nd then this claim–that the 12 years claim is “usually” seen by scientists as “misleading” but they have “so far kept silent” about it, seemingly endorsing it – is a half-truth easily disproved by a cursory google.

Here’s an interview with @DrKateMarvel and @KHayhoe who state explicitly that the claim is misleading – but not because it’s too alarmist, but because, as Dr Marvel says “We don’t have 12 years to prevent climate change — we have no time.”

nd then this statement that activists and politicians who talk about the 12 years deadline are engaging in a “(mis)use” of science. Why the fancy parenthesis, authors? Are you uncomfortable setting yourselves up as the spokesmen for science? Well, you should be.

People have the right to interpret & speak about science in moral ways and for moral reasons. It is a fact that we have 12 years to draw down emissions to some level to have some change at holding warming below 2C, thereby saving more lives. We have a right to say that.

There are certainly critiques to be mounted about the “12 years until the end of the world” trope (which is not supported by any IPCC report, of course), but your comment is not one of those.

Your comment is a political polemic that attempts to attenuate the power of climate campaigning. And its argument rests on misinterpretation of the rhetoric at issue and misrepresentation of the discursive field.

I am feeling increasingly dismayed by the push to discredit political discourse citing the deadline to halt warming at 2C.

Since at least COP 15, in 2009, the entire world has agreed that warming should be halted at 2C.

But we contest that now that the deadline is here?

(When I say “the deadline is here” I mean that absent the sparkle pony of large-scale BECCS, emissions must peak in 2020-2022. That’s now.) 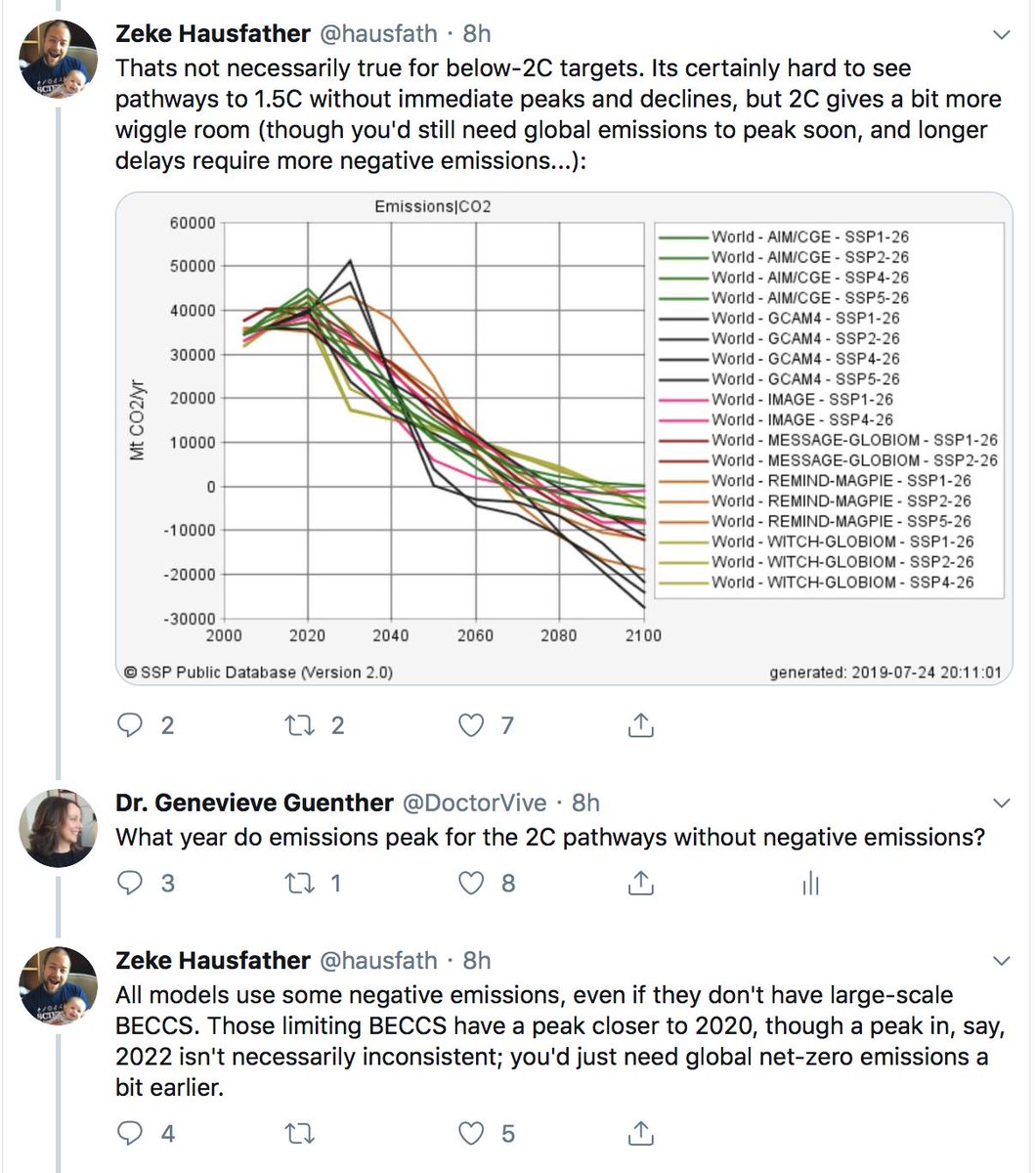 I repeatedly heard the claim today that this 2C deadline is “arbitrary.”

What does that mean? That the understanding that 2C is the threshold for widespread dangerous climate change is arbitrary? Is that what folks want to communicate?

It may not exactly represent climate change as an incremental slide into chaos, but it’s the foundation of our climate politics. It’s extremely counterproductive, I think, to start contesting it now.

For all these years action to halt warming at 2C was seen as something that could happen latter, whose costs would fall on “future generations.” That perception has provided political cover to the govts who have blocked climate action.

Now, people are finally starting to wake up to the fact that if we’re going to “save the world” – if we’re going to have places and societies and lives that at least somewhat resemble the ones we have now – we have to act NOW. Not in 20 years, not in ten, or five. Now.

We have to act now BECAUSE WE HAVE A DEADLINE. And this deadline is real.

We have to peak emissions by 2022 at the latest to have a hope of halting warming at 2C.

I understand the worry that if we cross 2022 and everything seems the same, people might say that scientists were wrong. (They’ll have to be told that the deadline was for emissions not temperatures.)

I also understand the worry that if we cross 2C and the world doesn’t end, people might say scientists were wrong.

But I think language about the world ending is a metaphor for the chaos and the death and the cultural sense of irretrievable loss that even 2C will effect.

[Anyone who takes “the world will end at 2C” literally needs either a) more education or b) to be ignored, IMHO.]

Deadlines themselves don’t lead to despair. The sense that they won’t be met does that. Yet there’s not a chance in hell that we’ll meet this deadline without the deadline in place.

And I can’t see how we meet this deadline, or any deadline to draw down emissions, if leaders and the public are told that the deadline (in place for decades!) is now arbitrary and doesn’t matter anyway.

I think the message must be: “we are out of time; act now.”